Our Coat of Arms

This unique brand is contemporary in design and various elements, reflecting the key attributes and brand personality of the MAKANA area, come together to form a composite logo.

Five dots represent all five of the biomes (major regional or global biotic communities, such as a grassland or desert, characterized mainly by the dominant forms ofplant life and the prevailing climate.) These dots are also symbolic of heritage and culture, reflecting the traditional face painting of amaXhosa.

The Aloe is highly characteristic of the Makana area and is a prominent element in the logo.  The curative properties of the aloe are symbolic of the healing of the injuries of the colonial and apartheid legacy of South Africa’s rural areas and the scars of inequality and economic inefficiency in our Province. The abundant growth of the aloe in this area represents the Municipality’s role in promoting sustainable growth and development for the improved quality of life of its entire people through addressing the challenges relating to all aspects of society including, economic, social, political, moral, cultural, and environmental challenges.

The aloe flower represents the abundant flora to be found in the Makana area. The upward pointing shape depicts growth and building, the steeple shape also reflects the historical buildings to be found in the area.  Most significantly the design incorporates the nib of a pen, reflecting the significant contribution that excellent educational institutions make in promoting the area and in stimulating the economy of Makana.

Representative of prolific wildlife and farming to be found in the area, the powerful horn element found in the shape of the aloe plant, also depicts strength.  The aspects of healing and growth are also emphasized in the prominence of this shape.

The drum, an instrument of calling and celebration, represents festival capital (National Arts Festival, Science Festival and School’s Festival),another significant contributor to promotion and economy of the area.  It also represents the spirit of Ubuntu to be found in the area – the spirit of generosity and the interconnectedness of the people of the area.

Included in the logo is the depiction of the rolling hills and wide open spaces of this area,  representing the role that the natural heritage, particularly the game reserves, and farming play in encouraging visitors to the area,  in creating employment and so contributing to the development of the economy of Makana. This element also depicts a healthy environment and contributes to the fact that Makana is a great place to be. 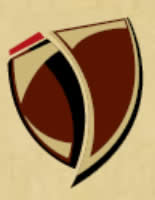 MAKANA is frontier country and visitors to the area are fascinated by the tales of the turbulent past.  The shield element strongly depicts the area’s history.  It also represents protection and strength, signifying the role that Makana Municipality plays in looking after the best interests of the people of the area.

One of the most dominant features of the logo is the mask element. This strongly represents festival capital, as it takes its form from the typical theatrical mask.  As an article worn in traditional ceremonies in the past, the mask also represents the heritage and culture of the area.

The logotype is designed in a bold, clean and well-balanced font representing strength and stability.